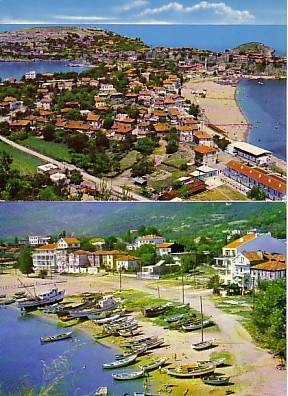 Strabon believes that the city of Amasra, which was firstly known as Sesamos city in the history, was founded by the Gasgas, which was a branch of the Scythians, or the Amazons that cleared the Hittites away from the Western Black Sea.

Amasra throughout the year 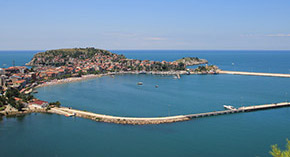 The swimming season begins after June 15th. You can swim in Kucuk Liman (Small Port) during northeaster and in Buyuk Liman (Great Port) during southwester. After the sunset, you can see people chatting and singing songs on the beaches of Amasra. During the summer season, you can watch the laser show performed after sunset in the garden of the Amasra Museum, where you and your children can learn while having fun. As part of Maritime and Cabotage Day activities, you can participate in swimming, greasy pole and tug of war competitions held on the 1stof July in Buyuk Liman area. 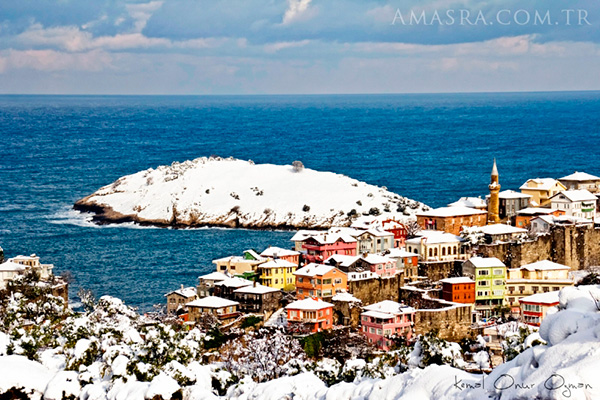 Winters are harsh and tough in Amasra. While sometimes it turns white, sometimes it indulges in southwester wind. This is the time when the fishermen make their living from the sea. The best fish (anchovy, horse mackerel, whiting fish) can be eaten in these months. One cannot get enough of that beauty hidden in those wild waves!

You can enjoy watching the town of Amasra turning from the shades of green to the shades of red and yellow in this period. An unforgettable, romantic holiday opportunity with the sound of waves and fresh fish along with the peace and tranquillity begins then. In this period, when the fishermen return to the sea, the price of fish reduces while it gets tastier.

Since the time, when the Genoese commander handed over the keys of Amasra to Mehmet the Conqueror in October 17th(1460), Celebration of Amasra’s Conquest are still held every year, traditionally.

In spring – March, April, May

You can discover all shades of white, pink and green in the flowers that grow in the Black Sea region. You can eat the most delicious fish and salad in this season before summer. You can discover the unique beauty and colours of sunset from the Baris Akarsu Park. The Kemerdere Bridge, which is about to be demolished due to lack of care, can also be visited in the spring.

Did you know about

that Amastris was the first queen (Persian Queen) to issue coins in her own name,

that according to the beliefs of Amastra’s people, Amastris used to have a private bath in Direkli Kaya,

that the word of Amastris meant strong woman,

that the salat al eidain (prayer during religious festivals) and Friday prayers have traditionally been practiced by drawing the sword in Fatih Mosque since the conquest of Amasra,

and that the nearest coast to Ankara (Turkey’s Capital city) is Amasra?

Who said what about Amasra?

Plinius described Amasra as “Elegant and Beautiful”, Niketas described it as “The Eye of the World”, Genoese as “The Castle of Flowers” and Diogenes as “A balance” while Mehmed the Conqueror expressed his surprise about Amasra by saying these words: “Oh my tutor! Could this be the eye of the world?

Do not leave Amasra without having

What to Buy in Amasra?


Do not leave without

Where is Amasra and How to Get There?

Amasra, which has the population of 7000 people and 3000 years of history, is a district of Bartin Province located in the Western Black Sea.

How close Amasra to other Cities?

Places to See Around Amasra

You can reach the bays around Amasra by renting a bus/car from Somakli Tour Rental Company.

It is an untouched beach with its golden sand and lush nature.

It is one of the longest coastlines of the Western Black Sea and the town has varied camping and accommodation opportunities.

The beach located in the resort town of Cakraz comes to the forefront with its social opportunities as well as its cleaning and natural beauty.

The town located on the eastern side of Amasra is famous for its boat-yacht manufacturing.

It is a coast town hosting 3 million year-old lava rocks.

It is a natural wonder with campsites.

It is a pool-like natural wonder. 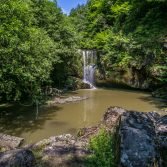 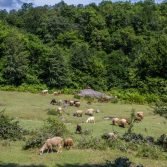 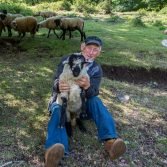 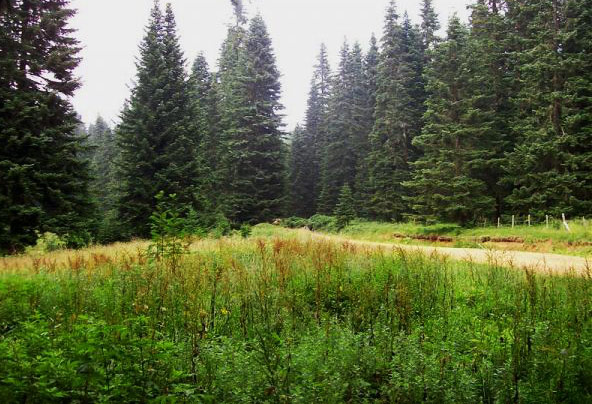 Amasra Lighthouse: Amasra Lighthouse, one of the oldest lighthouses in the Black Sea Region, was built by the French in 1863. It flashes 77 meters above the Boztepe Islandthat blocks the waves and winds of the Black Sea from reaching Amasra. The weight lifted upwards while setting the lantern with clockwork mechanism allows the lamp crystal to rotate as it goes down.

There are remains of a church and stairs carved to the rocks in the Rabbit Island. It is known that the Orthodox Patriarch Kyros lived here. The rabbits, which were taken to the island in the 1960s and adapted to the island in a short time, are still on the island, and you can catch a glimpse of them, while on the boat tours or through binoculars from Boztepe.

Amasra Museum: The building, which was built as a Maritime Vocational Highschool in 1884, started to be used as a museum in 1976. Amasra Museum, which contains some works from Hellenistic, Roman, Byzantine, Genoese and Ottoman periods, became an educational and entertainment place through video visualizations and sunken ship hall made after the restoration of 2017.

Amasra Castle: It is known that especially during the Genoese Period some repairs some improvements were made on Amasra Castle, which was built during the Byzantine Period. The castle consists of two main masses. One is the Sormagir Castle located in Boztepe and the other one is the Zindan Castle on the northeast side. Amasra Castle is on the UNESCO Temporary List of World Heritage under the title of ‘Trading Posts and Fortifications on Genoese Trade Routes from the Mediterranean to the Black Sea’.

Ancient Theater:It is estimated that the Ancient Theatre, which is thought to have been built during the Roman period, has the capacity of 5000 people. Today, only the entrance door of the theatre is visible.

Bedesten (State Assembly): The exterior dimensions of 45×118 meter of this structure, which is thought to have been built in the late 1st century AD, indicate that this structure was used as the State Assembly Palace. Afterwards, this area was named Bedesten as it was used for commercial purposes.

The first coal mine in Amasrawas opened in 1843. Today, coal drawing processes are still carried out. progress.

It is the area where the ancient port from the Roman period is located. Today, the ruins of the ancient port are somewhat visible. In addition, this area was used as an airport during World War I. 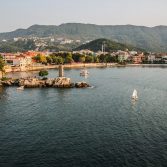 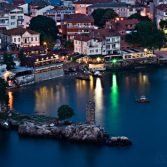 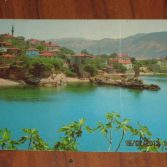 It is estimated that the 7 m high structure, which is built on a rock 20 m from the Kucuk Liman (Ancient Port), belongs to a lighthouse or an observation tower over the port. 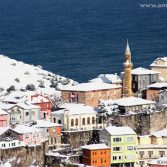 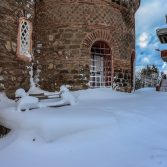 Special patterns were used on the window ledges of the chapel, which was built in the inner castle in the 9thcentury by using a brick-stone-mesh system, the reminders of “the Prophet’s Ascension to the Chest” scene are portrayed on the Ambon Vault.

The chapel was put into service as a Culture House after being restored in 2002 by the Amasra Museum.

It is seen that the Genoese (Italians), who had good relations with the Ottoman Empire and took over the Amasra Castle, left many traces of the Genoese rigs in the Amsra Castle. 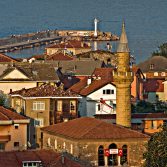 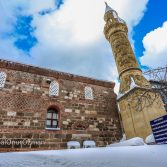 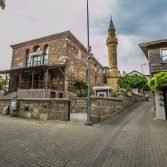 The church building from the 9thcentury was converted into a mosque soon after the Ottoman conquest of Amasra.

Since no blood was spilled during the conquest, the sermons in Fatih Mosque are traditionally given by drawing the sword.

The bridge with a length of 8 meters and a height of 5 meters is thought to have been built during the Roman period and used as a water passage. 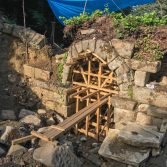 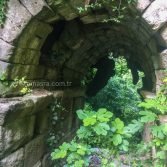 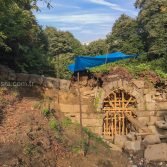 It is the Roman bridge that connects the Zindan Island and Amasra. Despite having been restored in different periods, it is still standing firmly. This bridge, under which the boat manufacturing/repair places were located until the beginning of the 2000s, was opened to provide water flow to the Kucuk Liman Area.

It is the eagle and Roman soldier figures carved into the rock during the time of Roman Emperor Tiberius Claudius Cermanicus (M.S.41-54). The monument is located 5km away from Amasra, on a historical hiking route and on the old Bartin road. 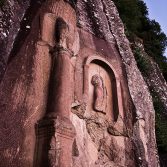 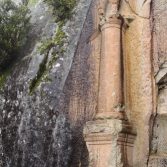 It is the market place where women have been selling fresh vegetables and fruits, homemade cheese and jams traditionally for the last 200 years. You can visit it every Tuesday and Friday through all year.

This map was prepared by Kemal Onur OZMANand Petra Havrdova. We would like to thank Magdalena Klaus for her contributions. Translation by Gül Berivan Karaldi Ekiz.

All rights reserved © 2019. Copying and distributing without permission is prohibited. For suggestions and opinions on the map please contact [email protected] 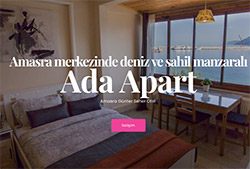 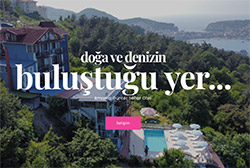